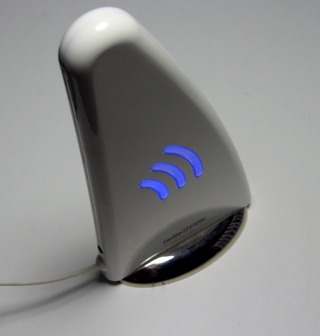 The problem with it is that we are often not actively tuning in to the radio to catch a program, but rather leave the radio on in the background. The url=Shark 2 from Griffin/url changes that, by providing a 'Tivo' like service for your radio, with time-shifting technology. The Radio Shark is a sleek looking unit, in black, with a glowing 'radio wave signal' to indicate being in operation, that even changes color to red when recording. I like that very much, it's the difference between a good product and a cool product. The 'fin' is about the height of a paperback novel, and around the thickness of a DVD jewel case. The base is a nice non-slip one like an iPod dock.

In use, there is bugger all to it. It just plugs in via USB and in typical Mac fashion, requires no drivers. Simply install the Radio Shark software and instantly you've got radio. The Radio Shark app is what you'll be using to listen to live radio and record your streams. To tune into a station, just drag the slider across until the frequency you want comes up.

I found this a bit of a pain, I should be able to just type in '102.7' and have Triple R start playing. You can create bookmarks at least, so once you've tuned them in, you can just choose the station. Another thing that bugged me here is the fact the Radio Shark doesn't support the Radio Data System. RDS is a little feature in FM radio where the name of the station, track playing and any other text information the station wants to send can be displayed on a screen on the tuner.

I would have thought that when paying US$49 for a radio, RDS would be a given, particularly when hooked up to a computer, which can use that metadata when recording radio. AM as well as FM is supported by the Radio Shark, so you can get your talkback fix. Radio Shark also has an equalizer, like in iTunes, so you can tweak the best sound from a traditionally bland radio broadcast. The killer feature however is the time-shifting and recording. IF you've ever used EyeTV on your Mac, this is eerily similar.

You can listen to your live broadcast, then simply drag the slider bar back a bit and listen to the last 30 minutes again and continue on, or snap back to the live broadcast. Radio Shark includes a recording feature where you can set a timer and the Radio Shark will record the designated frequency for the length of time you state. It will record to either an uncompressed AIFF file, which you can then encode to whatever format you like using a separate program (say to AAC, MP3, Apple Lossless) or direct to AAC, with your choice of bitrate.

Radioshack For A 12power Supply

The quality is superb, crisp and clear if you've got a good signal to start with. If you can receive the station fine on a 'conventional' radio, there's no reason why this can't do it just as well, or better. Plug in a decent set of speakers and a solid FM broadcast is virtually indistinguishable from a 128k MP3/AAC file. And, ahh, that's all there is to it! It's radio, but really well done. If you're into listening to radio but not enough time to listen to it, the Radio Shark is excellent, I don't know of any other products on the market that do it this well (or even do it at all). Macsimum rating: 9 out of 10.

Other trademarks and copyrights appearing in this printing or software remain the property of their respective holders. Not responsible for typographical errors.