To celebrate Docker’s third birthday, today we start a limited availability beta program for Docker for Mac and Docker for Windows, an integrated, easy-to-deploy environment for building, assembling, and shipping applications from Mac or Windows. Docker Engine enables containerized applications to run anywhere consistently on any infrastructure, solving “dependency hell” for developers and operations.

Docker for Mac and Windows have already been used by a few private beta testers and they have enhanced developers’ daily workflows. “The Docker for Mac product has addressed all of these issues for us:. installation has been significantly smoother thanks to the native Mac application and autoupdater. official images now “just work” with the Mac.

the new development workflow allows engineers to quickly spin up new versions of services and develop software natively on the mac against them, with everything just working.” –, Co-founder, Mixcloud You can sign up for today. This is a limited availability private beta and signing up will add you to a waiting list. We will add more people from the waiting list on a rolling basis as we get feedback and improve the product quality.

Docker for Windows currently only ships on Windows 10 editions that support Hyper-V. Making things easy to use and functional takes elaborate engineering work: what makes Docker for Mac and Windows feel native are deep integrations with the host system in terms of virtualization, networking, security and file-systems. These integrations leverage the systems and virtualization expertise of Docker’s recently acquired team, as well as the Unikernel-related technologies they developed over the past 5 years: for example, the translator between Linux and Mac OS X networking uses the. Expect to see more of that kind of work in the future across the Docker line of products.

All of the OS-level integration innovations will be open sourced to the Docker community when these products are made generally available later this year. As usual with software, we’re building on the shoulders of giants: we would like to thank Apple and Microsoft for their assistance integrating their platforms with Docker, Michael Steil for xhyve, and the Docker product development teams in San Francisco, Cambridge, and Paris. By Patrick Chanezon is member of technical staff at Docker Inc.

He helps to build Docker, an open platform for distributed applications for developers and sysadmins. Software developer and storyteller, he spent 10 years building platforms at Netscape & Sun, then 10 years evangelizing platforms at Google, VMware & Microsoft. His main professional interest is in building and kickstarting the network effect for these wondrous two-sided markets called Platforms. He has worked on platforms for Portals, Ads, Commerce, Social, Web, Distributed Apps, and Cloud. More information is available at. Patrick tweets at. 79 Responses to “Docker for Mac and Windows Beta: the simplest way to use Docker on your laptop”.

Nicholas Stein Thank you so much. My Windows 10 pro machine will not allow me to uninstall Hyper-V. It rolls back upon reboot. That means when I run Toolbox, I get the VirtualBox error.

With VirtualBox installed, Hyper-V cannot properly install a Virtual Switch. So I am trying to get started only using the command line and installing a downloaded version of Linux (Ubuntu) which has more than I want on my Docker machine. Do I really need a full Linux UI just to run a process? I am really hopeful that this beta will release me from VirtualBox. BTW, I am getting lots of comments on my BDay3 Tee, and the contest materials, along with the help I received at the Irvine CA meetup have been super helpful. Thank you again. Stan Towianski Hmmm.

Well, I tried the docker-machine stuff and that is just too much of a pain to use when it comes to networking if I remember rightly. I had my docker 'user' inside my virtual-machine inside my mac and that extra layer of VM was just a pain. Which user am I now?? Which network is it??

So I moved to docker for mac. That would be better; just one level of 'which user am I?' I am running into blow out problems though. I have a mac with 16gb and docker 1.12.0-a I am using the standard Jenkins 2.7.x in docker image. My mac starts up running about 3.8gb.

I start jenkins and it goes to 7.9gb I start building 2 jobs and it was hitting about 14gb and sometimes 15gb. Problem: 2 or 3 times it just blew out; docker container stopped and it did not release system memory. Maybe I need more memory, but right now with 1 job running top says it is at 8.7gb. 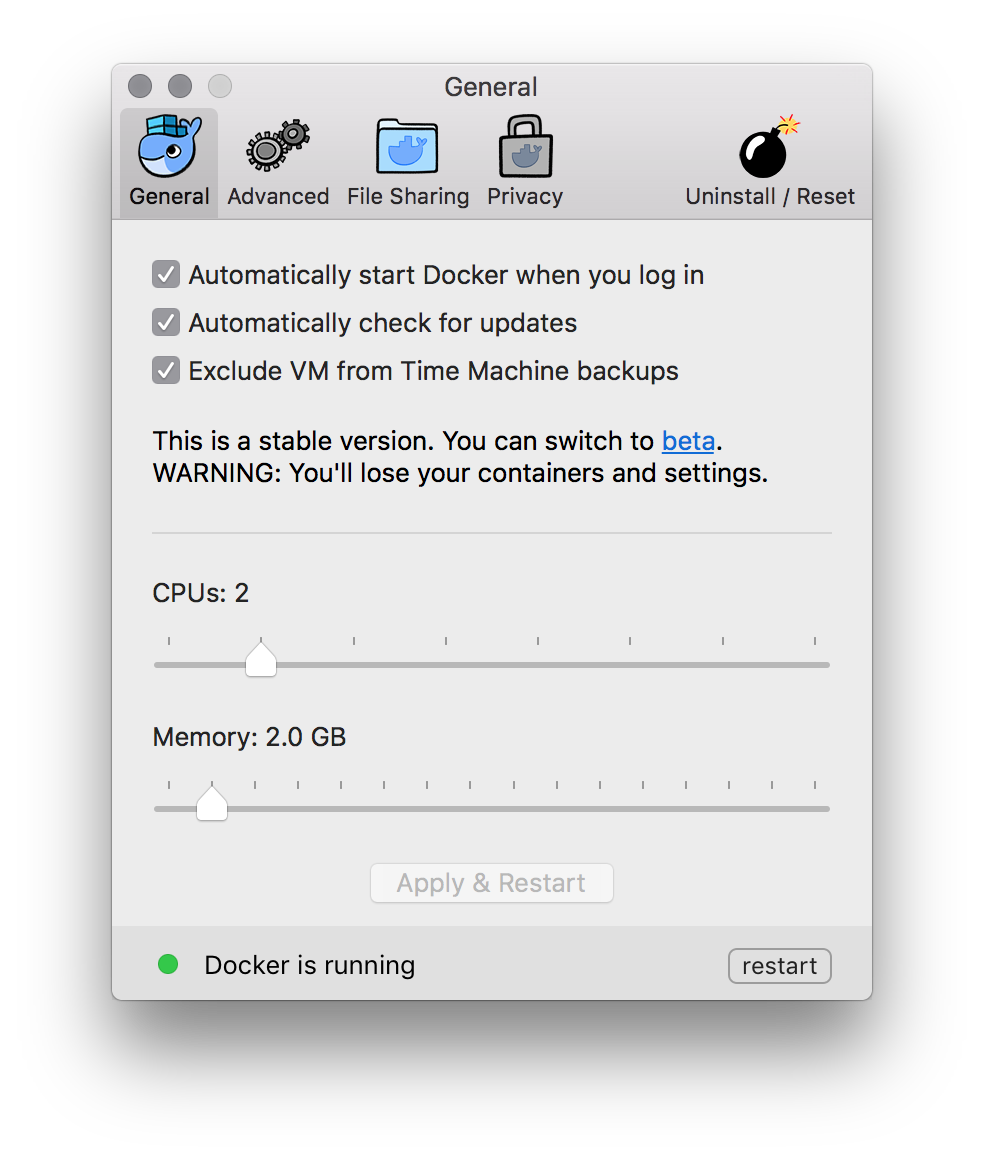 Maybe it does not release memory too well? Leave a Reply.